John C. Hitt, UCF’s fourth president who retired on June 30, has been recognized by The Chronicle of Higher Education for creating “one of the biggest success stories in contemporary higher education.”

“Many other college presidents have made similar gambits and found mixed results. Hitt is unusual for having accomplished them all, at one university,” according to the Chronicle.

When Hitt arrived in 1992, UCF was a midsize public commuter school. Twenty-six years later, UCF has grown from 22,000 students to 66,000; has become a research institution; and has opened a Division I football stadium, a medical school, and soon, a new campus in downtown Orlando.

The Chronicle credited much of UCF’s success to Hitt’s ability to form partnerships. During his tenure, he partnered with area state colleges, Electronic Arts, the military and defense industry, the city of Orlando and so many others to guide UCF’s growth and position the university as a supplier of quality talent to companies and industries.

Perhaps one of Hitt’s greatest achievements at UCF is broadening access to a higher education for more people, while also maintaining quality and attracting high-achieving students, Joshua Wyner, founder and director of the College Excellence Program at the Aspen Institute, told the Chronicle. 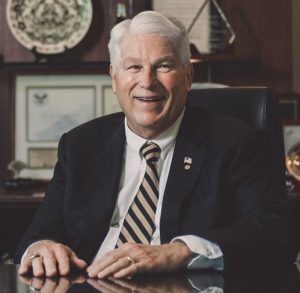