The Office of Diversity and Inclusion was established in 1994 to support the University of Central Florida’s 4th strategic goal, “to become more inclusive and diverse.”  We strive to make diversity and inclusion visible and critical elements that indelibly permeate the life and values of the UCF community. The office plays an important role in support of the UCF Collective Strategic Impact Plan.

We offer education, training and support services, facilitation of cross-campus collaboration, and enterprise-wide leadership to the campus and our community to build an inclusive culture for all students, faculty and staff. The ODI Workshop program engages thousands annually. The professional development programs engage under-represented faculty, staff and students: Leadership Empowerment Program, CREAR Futuros, and LEGACY. The Hispanic Initiatives effort leads the UCF to excel as a minority-serving institution. 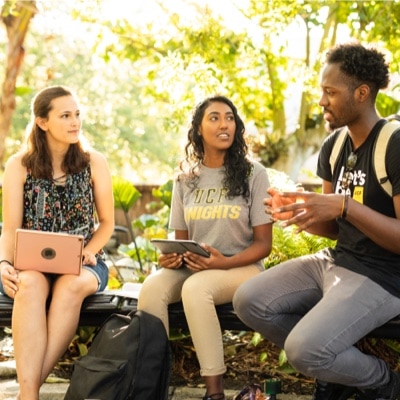 The mission of the Office of Diversity and Inclusion is to collaborate with the University of Central Florida community to advocate for and educate about the university’s goal of becoming more diverse and inclusive.

Our vision is to position UCF as a center of excellence that is nationally recognized as a higher education model for our diversity and inclusion practices, policies, and culture.

To learn more about the Office of Diversity and Inclusion, take a look at this information that we shared at the 2018 Diversity Breakfast.

The Office of Diversity and Inclusion leads the university’s effort to become more inclusive and diverse through a number of initiatives.

UCF Diversity Week is a celebration of our diverse community and an opportunity to explore topics across the broad range of human identity, experience, and interaction.

Our community members’ stories can bridge the gap of myth and misunderstanding that seem to separate us, by revealing our shared humanity and highlighting the unique path we take toward self-realization.

The Collaborative on Academic Careers in Higher Education (COACHE) survey is a tool used by institutions to gather faculty perceptions on their workplace experience. Beginning by highlighting the areas where we are doing well and where you feel the institution could improve, this survey helps guide efforts to increase faculty satisfaction and advance faculty-centric initiatives across the university.

FoE is a national self-study program, in partnership with the John N. Gardner Institute for Excellence in Undergraduate Education, that promotes awareness of experiences unique to transfer students and bridges gaps between academic and student affairs support to achieve greater retention and graduation rates.

While the Collective Impact Strategic Plan spans many areas across the university, we believe UCF will become the recognized leader among 21st-century universities for our transformational impact, which we will measure by these 5- and 20-year objectives:

In late February 2020, we launched the Campus Climate Survey, designed to help us build a more equitable and inclusive environment at UCF. This voluntary survey will guide efforts of university leadership, the Office of Diversity and Inclusion and our entire campus working to empower and elevate voices across our community.

The Office of Diversity and Inclusion has reinstated the Diversity Action Grants program to assist organizations and units in sponsoring diversity speakers, programs, and activities in support of the UCF goal “to become more inclusive and diverse.” A limited number of grants will be awarded. Grants will not exceed $250 and are limited to one per organization per academic year.

The Office of Diversity and Inclusion works to facilitate campus collaboration and partnerships through a number of committees. ODI seeks advice from its own Faculty Advisory Committee and works with student, faculty and staff associations to promote their efforts to engage and improve campus life.

DIWG Mission: In support of the UCF’s goal of becoming more inclusive and diverse, the working group will seek to:

This group meets to share information about bias incidents and support resources and processes at UCF. If you experience discrimination related to race, gender, religion, sexual orientation or gender identity, or disability, you can contact the following to find support:

The Office of Diversity and Inclusion has been recognized for the work and dedication it has put into educating, promoting, and facilitating experiences and methodologies in support of UCF’s goal, To Become More Inclusive and Diverse. These are a few of the accolades we have received over the years:

For the 3rd year running, UCF received the 2018 Higher Education Excellence in Diversity (HEED) Award from INSIGHT Into Diversity magazine, the oldest and largest diversity-focused publication in higher education. As a recipient of the annual HEED Award — a national honor recognizing U.S. colleges and universities that demonstrate an outstanding commitment to diversity and inclusion — UCF will be featured, along with 95 other recipients, in the November 2018 issue of INSIGHT Into Diversity magazine.
https://www.insightintodiversity.com/about-the-heed-award/

The INSIGHT Into Diversity HEED Award, open to all colleges and universities across the U.S., measures an institution’s level of achievement and intensity of commitment in regard to broadening diversity and inclusion on campus through initiatives, programs, and outreach; student recruitment, retention, and completion; and hiring practices for faculty and staff.

In recognition of excellence in support of HACU’s mission, University of Central Florida.

Diversity Champions exemplify an unyielding commitment to diversity and inclusion throughout their campus communities, across academic programs, and at the highest administrative levels. Less than 15 colleges and universities across the nation have been selected for this honor. Known for visionary leadership, Diversity Champions are institutions that set the standard for thousands of other campus communities striving for diversity and inclusion. They develop successful strategies and programs, which then serve as models of excellence for other institutions. Diversity Champion schools exceed everyday expectations, often eclipsing their own goals.

In support of Orlando African Americans.

For UCF’s work that emphasizes that diversity is essential – indispensable – to providing a good education to anyone who expects to live and work in the United States or anyplace where they will work with, buy from, sell to, serve or live with a diverse population.

Presented to the University of Central Florida in recognition of its outstanding commitment to diversity and inclusion for the year 2012.

Presented by Insight Into Diversity

In support of our mission and goals

UCF Diversity Week is a celebration of our diverse community and an opportunity to explore topics across the broad range of human identity, experience, and…

The Office of Diversity and Inclusion recognizes the land of indigenous people many of whom lost their lives to genocide and were forced to leave their land, the land held by the Ais, Apalachee, Calusa, Timucua and Tocobago tribes.